Grace is doing so well since she has been on her CBD, I can’t even explain how appreciative we are. We have not seen any seizures, and her skin is looking so much better. She is more active with more verbal communication and seems to be getting her milestones caught up. Her bloodwork is improving, we are feeling so blessed! Sending the RoC team HUGS <3 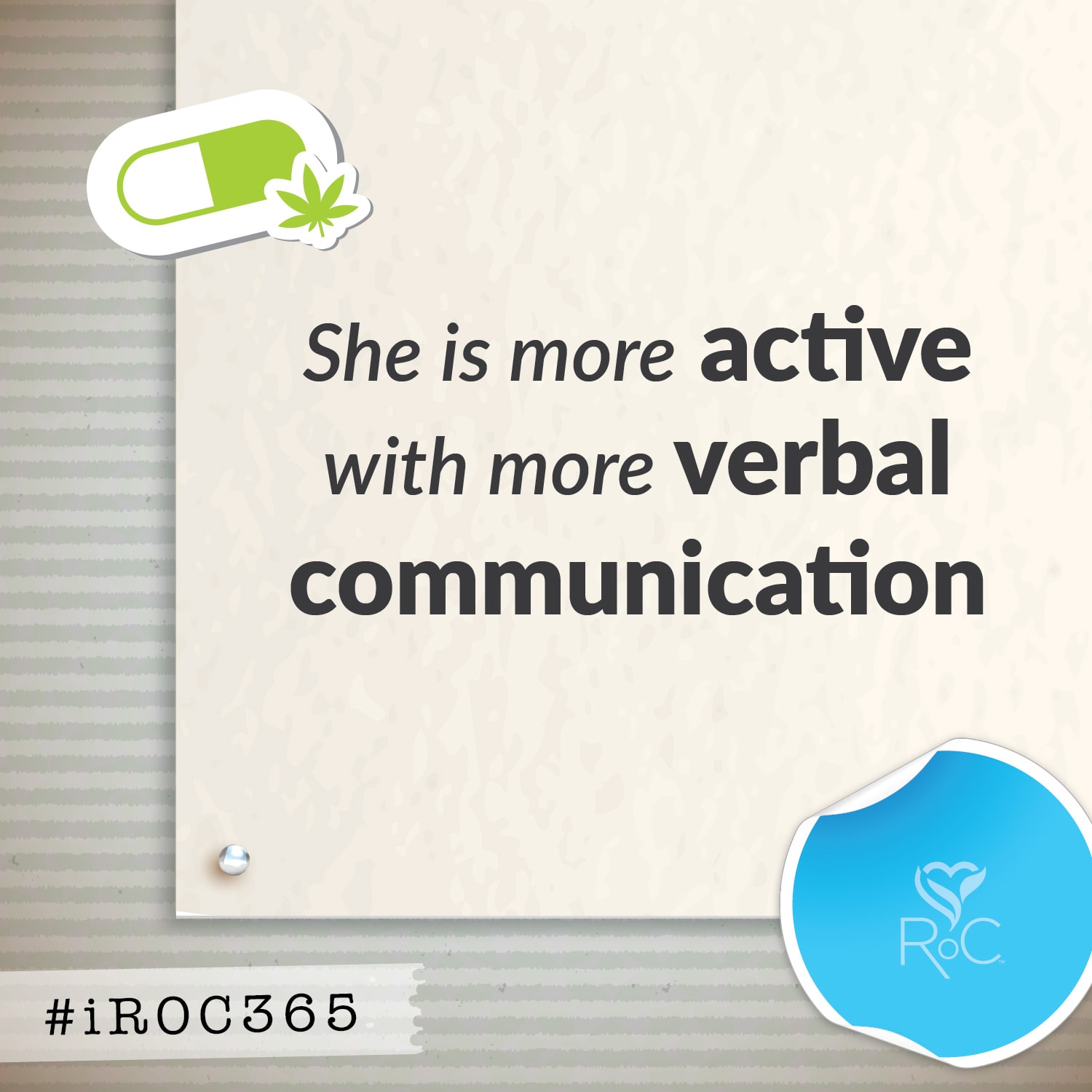 I didn’t use any more opioids, just cannabis oil. I was able to work from home the day following surgery without any impairment from medication. I was able to reduce the dosage after about a week. The next surgery I had was to remove 2 adjoining molars, she had to cut into the jawbone to remove a twisted root. This time I increased the dosage of cannabis oil without taking any opiates at all. The cannabis oil kept the pain away completely. This could really help the post-surgery opioid addiction problems we have in this country, and this is a completely viable alternative to pain medication.

Chloe has been taking cannabinoid therapy for three years and after an EEG to measure seizures, we were told Chloe is now seizure free! To put the icing on the cake, her neurologist admitted to us that she truly believes it was all the oil! She said she has never seen someone with the type of seizures that Chloe has recover so well.

Being on CBD has given Jason hope. He hasn’t had that in quite some time and being accepted into this program and starting to take CBD he has found hope. He knows that someone out there cares and is listening. He knows he matters!

The grant money has helped him with everyday needs like food and medication. People with disabilities get pushed aside a lot and don’t get nearly the amount of help they need. The fact that the Realm of Caring exists and that there is someone out there pushing boundaries to help people is a wonderful boost. It reminds him, and me, that if we just have faith, everything is going to be okay.

Thank you so kindly for your random act of kindness and love.  You are more amazing than you will ever know. We’ve never come across or met anyone like you or a group of people so amazing as you and the RoC team. It’s like having an extended family that has more kindness, love, and compassion in their hearts than some of our own blood family members.  Thank you!

In a time when we thought we had lost all hope for a cure, for a chance at life, RoC was there, helping us with this miracle oil.   You have opened your hearts and arms to us and truly made us feel welcome, appreciated, and loved. We appreciate you and thank you and the entire team from the deepest depths of our hearts.   You have kindness and an inner shine that sets you apart from the world, a presence that needs to be recognized, for all that you do and for being “you.”  Thank you!

Born happy and healthy, Jaqie was stricken by the first of what would be thousands of seizures just days after a normal well check which included scheduled vaccines. Up to that point, Jaqie had progressed normally according to the doctor’s growth charts. After that first seizure, Jaqie was only four months old and would never be the same. She would actually regress.

Over the years, through pharmaceutical trial and error, Jaqie would lose her fine motor functions, unable to hold her own head up. She couldn’t scratch her own butt if it itched, nor vocalize it to someone who could. She never learned to sit, scoot, crawl or walk. The medicines, forced as the only option for relief, proved to make her worse. By the time she was two years old, she was pronounced legally blind.

The doctors threw their hands in the air and said there was nothing more to be done.  In April of 2014, unwilling to believe she was a lost hope, we put cannabis oil in our toddler’s mouth.

Today, Jaqie not only scratches her own butt when it itches, but she also rolls over, cries, laughs, babbles, kisses, hugs, stands with help (that’s huge for a child that previously had zero muscle tone) and she takes no pharmaceutical drugs. Cannabis only.

Did I mention she can see again?

Ruben’s most recent EEG exam has shown much improvement. We will continue to proceed with a longer EEG exam to get the most accurate results. Also, it seems to help his ADHD. He’s a bit more focused.  This has been such a blessing. At the moment I am unemployed to be a full-time caregiver to my 2 boys who have a disability.  I don’t know how we’d be able to afford it otherwise.

We are truly grateful for the Realm of Caring organization and those who have helped make this grant possible so that my son has a chance at better health and a better future.  My son has been on Valporic Acid for the past 5 years to control his seizures but to know that something much more natural may be helping not only his seizures but his overall health and behavior is more than I could ever ask for.

Johanna experienced so much improvement when she first started CBD, we weaned her 100% off of her Keppra and she is only on CBD now. This lasted for 6 months and then she started to have seizures again, an unfortunate thing about her particular diagnosis, the seizures will likely be very persistent. We reluctantly started her on a new drug, Vimpat, while giving her a very minimal dose of CBD as we transitioned. Her mellow attitude we had gotten accustomed to while she was on only CBD oil was missing during that time.

Since starting her on the Vimpat and now getting her back onto her CBD regimen we are starting to see the mellow girl we adore and her concentration and comprehension is greatly improving again. We are firm believers that the CBD oil is the very best thing for her, but her condition is so persistent that there is a need for a little something more, at least at this time. We hope we can get to a place where CBD will be all we need again.

Jensen has improved over this last year, and especially this last month. I am giving a ton of credit to the hemp oil that we are giving him at night.  Jensen almost always has had seizures every night- but since adding this cannabis oil only at night, he had his first full week of NO seizures day or night!! This is huge for Jensen.  We are grateful that we have found this product, this program, and Realm of Caring. Every time we have called in, the customer service people are so helpful and understanding!

This grant money has absolutely helped our financial situation as it has allowed me to have more money to go towards other medical bills, groceries and for the rest of our kids.  Over the past 2 years of searching for something to help my son and his seizures, our savings account and anything extra has been depleted.

The greatest blessing has been allowing us to do some extra activities as a family- as we have not been able to do anything like that for a while.

Cannabinoid therapy and ROC in particular have improved my health tremendously! Before this therapy, I had run out of options. Prior to this Cannabinoid therapy I had run the gamut of treatments, including a large number of pharmaceuticals and natural supplements and therapies to treat my Juvenile Polyarticular Rheumatoid Arthritis. This did not result in healing but rather my original disease worsened and I was left with life-threatening side effects. My then Doctor’s last words to me were that I was going to die if I didn’t get the inflammation in my body down as it was affecting not only outward joints that were visibly being damaged but internal organs as well.

In addition to that, I was in need of healing for the numerous side effects. Cannabinoid Therapy and ROC has been able to accomplish that unlike anything else. Before this therapy, I was crippled, in excruciating pain all of the time and unable to do anything for myself, including basic necessities. Now I can do everything and then some! Including planning healthy recipes and cooking which I love to do, writing, drawing /painting, and singing. Basically, Cannabinoid Therapy/ROC has saved my life!!